a hackathon with more than 40.000 participants to fight the worlds most pressing current problem

The world is currently facing problems at a scale that has not been seen so far. In times of physical isolation, the German startups and think tanks Code for Germany, Initiative D21, Impact Hub Berlin and others came up with a creative approach, to bring people together to find solutions to tackle problems that arose with the global crisis. Within little more than one week, those organizations set up a plan to host the biggest, remote-only hackathon to this point so far. Soon, they received backing by the German government, represented by Dr. Helge Braun, head of the German chancellery.

Until Friday, the 20th of March, people could register to participate in the hackathon. Until Friday evening, more than 40000 People did so. Registered participants had the chance, to form teams and select use cases, which they would work on through the course of the weekend. In the week before the hackathon, people could already submit ideas, of which more than 2000 have been collected until Friday.

The organization team had been filtering ideas already, so that on Friday, roughly 200 ideas had been extracted and shared with all participants for inspiration. In the meantime, Social Developers Club members and their friends formed a large team of 24 people. Together, 3 use cases were selected which should be worked on through the course of the weekend by workstreams of up to eight.

One of the big issues in the current situation is the distribution of information to where they are necessary. People want to be informed about latest developments and decision makers need to communicate the measures that are taken to the public, so everyone can be aware of them. However, whenever topics become viral, false and misinformation pose a serious thread, as they could cause panic, which showed well  in the beginning of the crisis, when people started hoarding toilet paper.

Therefore, the first workstreams set their goal to create a web app, which can be found at CoronaFaktenCheck.de, where users can submit the URLs of information (i.e. tweets). The system then checks the information and provides a judgement, if the information can be trusted, or if it can be considered as “fake news”. The application consists of a React frontend and a python backend including a BERT (Bidirectional Encoder Representations from Transformers) model for natural language understanding. After the hackathon, the team kept going, refining the solution and even being featured in the Stuttgarter Zeitung! Congratulations for the success to An, Elina, Daniel, Maike, Philipp, Robin and Sabrina!

The team around Homework.io was facing a different challenge: As schools stared to close nationwide about the time the hackathon took place, thousands of students were confronted with the new (hopefully temporary) reality of remote classes. As digitalization in German schools has only slowly started in the last few years (if at best), lots of schools are confronted with logistical issues when it comes to facilitating remote classes. Homework.io tries to provide a remedy in form of a system, which can be used for automatic distribution of homework task as well as grading them.

To make the app more appealing, they included gamification aspects and created dashboards for students and teachers, where they could see their own successes or the status of the class. The app can be deployed on premises, so data privacy concerns can be handled, and is available in German and English. Congratulations to Dominik, Ingo, Julia, Linus, Marcel and Nico for the success!

The third team was developing towards a solution for small business owners and self-employed people. In the current crisis, markets slow down and especially small businesses suffer, as they often strongly depend on immediate customer demands, which basically froze because of the current restrictions, while at the same time, businesses of this size often have only small to no savings to rely on when things don’t go as planned. By now, there is a large number of government aid programs and other public institutions offer help and support.

The goal of the third solution is to bring available information together and make it easily accessible for people who are impacted. The team created a website, where available programs are listed and can be filtered to the respective case. Also, the team created a chatbot which is embedded onto the website, which can help users to filter the large number of offerings. The website has been built using Angular and is deployed as a Docker container, as well as backend services. For the chatbot, Google Dialogflow has been used as an engine. Congratulations to Anh, Elisa, Lea, Liza, Nils, Philipp and Vuong who worked together with me on the project, for what we achieved together!

As a team, we created three uniquely great products, while having lots of fun at the same time. Besides development, we had lots of coffee breaks, group workouts in the afternoon as well as “remote-drinking” sessions in the evening and I personally enjoyed working together with people I did not know before. I did also learn a lot, using this as a chance to get familiar with technologies that I didn’t work with before, in this case Elasticsearch. Thanks to the SDC for hosting the Slack channel, where we spent the majority of the time, and the GitHub repositories, where our code resides! 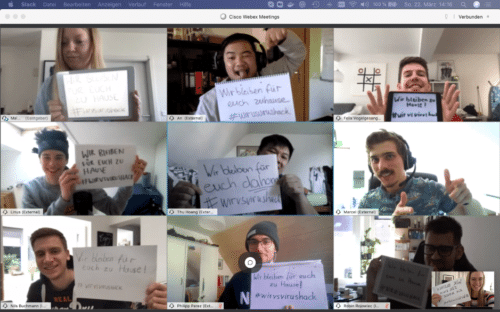 The picture above describes our physical state after 2,5 days of nonstop hacking pretty good as well. In case this event intrigued you and you would also like to participate in such a hackathon, there might be something coming up for you! From Friday, April 24, until Sunday, April. 26, the European Union will hold a hackathon as well, using WirVsVirus as inspiration, under the motto “EU vs. Virus”. Registration opens on Tuesday, April 14, and can be found here. The SDC team can be found there again as well.

So long, stay healthy and stay at home!

Felix has studied information technology and economics, and is working as a consultant for cloud, AI and automation. In the past, Felix has worked a lot in the fields of IoT, conversational AI and machine learning. He works and lives in Cologne. In his free time, he likes to code and to participate in coding related events (as can be seen in this post).

Want to stay up to date?

then you should give our email list a try. We'll send out new post and keep you updated on Meetups and Workshops